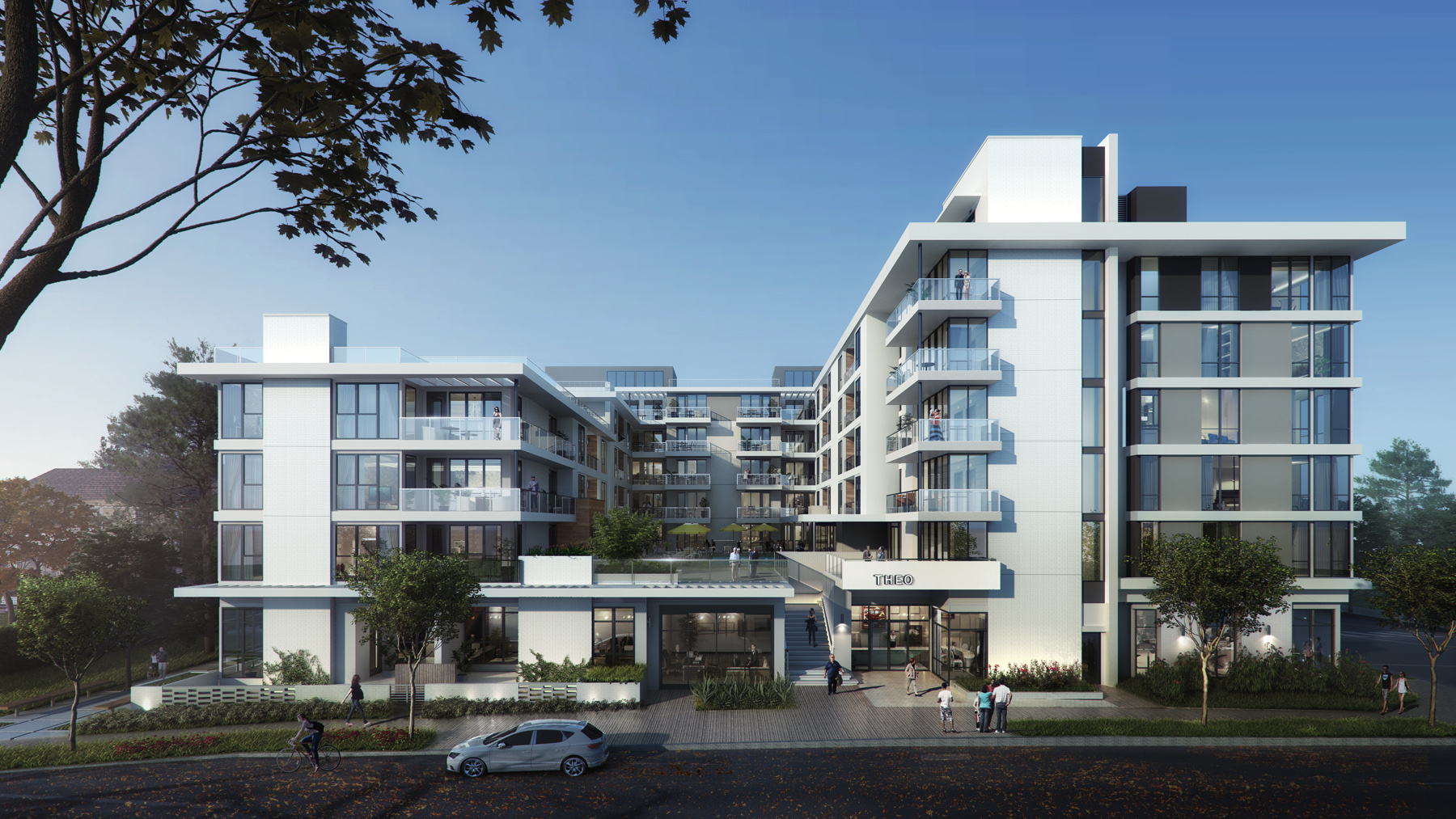 KTGY has teamed with developer Summerhill Apartment Communities, Pasadena Heritage and the City of Pasadena Design Commission on a structure that addresses its historic surroundings. The Theo is next door to a small park, a 120-year-old cedar tree and the Theodore Parker Lukens House, a 130-year-old Victorian structure that is the oldest in Pasadena. The apartment building’s name is an homage to the first name of that home’s original owner, a well-known conservationist and real estate investor.

The six-story building is set among courtyards and terraces with views of the San Gabriel Mountains and the Lukens House. The Theo doesn’t attempt to compete with the ornate style of the Lukens House, but instead serves up a simple, Modernist style with outdoor spaces that embrace its next-door neighbor. Those spaces include an observation room on the southeast corner, directly facing the Lukens House. This covered, naturally ventilated seating area features historic information about the house.

The Theo also offers rooftop amenity space, pool and spa area, cabana terrace, lobby courtyard, outdoor kitchen and dining and dog-wash area. In addition, there are terraces that step down from six to two levels, accommodating these programmed areas.

“Through a series of meetings with Pasadena Heritage and the Design Commission, KTGY and Summerhill brainstormed various design solutions that responded to both the city’s architectural past and the current zoning regulations that push for high-density infill solutions close to public transit,” KTGY’s Keith McCloskey, LEED AP, executive director, design, told MHN. “The resultant six-story, mid-century-styled project captures the foundational elements of the style with simple floating planes, large expanses of glass, and an emphasis on horizontality.”

Pasadena requires 30 percent of total gross square footage be usable outdoor open spaces, McCloskey said. These spaces were configured in combinations of active and passive courtyards. Many maximize views, and each offers a unique experience.

“Summerhill was focused on outreach and engagement with the various stakeholders, including City Planning, Pasadena Heritage, and the Design Commission,” McCloskey said. “This outreach was instrumental in creating a project that not only pushed for design excellence, but was also truly a win-win for everyone involved.”

The Theo is scheduled for an August 2019 opening.