JLL secured a $173 million acquisition loan for the buyer. 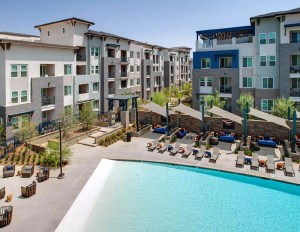 Harbor Group International has made its seventh multifamily investment in the Southern California region, while Azure Partners is making its first with the firms’ joint acquisition of a 480-unit community in Santa Clarita, Calif.

Recently developed in two phases from 2020 to 2021 by JPI, Jefferson Vista Canyon offers studio, one-, two- and three-bedroom units that range from 640 to 1,307 square feet. The Class A apartment community also features an entertainment room, clubroom, fitness center, dog park, TV lounge center, garden area, rooftop deck with a firepit and barbecue grills, swimming pool with a spa and cabanas, and conference rooms. Greg Heller, managing director at HGI, told Multi-Housing News that the community was currently in its lease-up process, but has so far reached 80 percent occupancy.

Jefferson Vista Canyon also has an embedded Metrolink commuter rail and bus transfer station that connects residents to major employers and entertainment options in the Los Angeles area. The City of Santa Clarita is also planning to construct a bridge across the Santa Clarita River that would connect the community with Soledad Canyon Road, further improving the area’s interconnectivity. The newly-built community is also part of a 185-acre mixed-use master-planned development that is expected to offer 650,000 square feet of office space, 165,000 square feet of retail, an 11-acre park and 10 miles of hiking and walking trails when completed.

Richard Litton, president of HGI, said in prepared remarks that the acquisition of Jefferson Vista Canyon was part of the company’s strategy of acquiring communities in well-located, dynamic markets with strong employment fundamentals. The latest acquisition in Santa Clarita is HGI’s seventh acquisition in the Southern California market, following its purchase of a 220-unit garden-style community in Pomona, Calif., in the summer.

As for Azure, Jefferson Vista Canyon will be its first entry into the California market, Bryant Ferber, Azure’s managing director & head of acquisitions, said in prepared remarks. He added in his prepared statement that the firm is hoping to get into more opportunities in the western U.S., particularly within submarkets with a strong growth trajectory. Azure previously worked with HGI on a number of suburban New York City communities, including a 588-unit luxury tower in New Rochelle, N.Y. and a 504-unit community in Rockland County, N.Y.