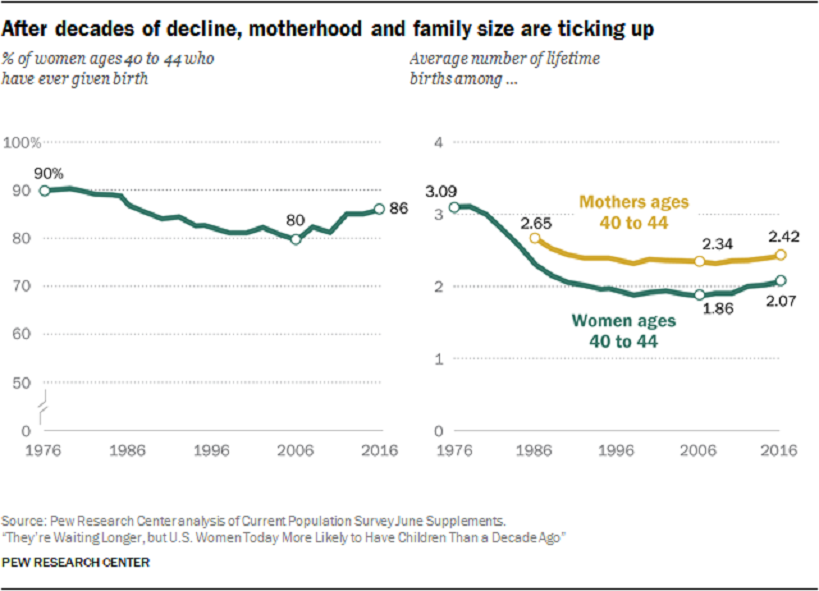 The Pew Research Center reported a number of demographic trends last week that are certain to shape real estate markets and valuation, especially the long-term outlook for the multifamily sector. On the whole, the trends appear to be positive.

For instance,  Millennials are approaching Baby Boomers in population (71 million vs. 74 million, as of 2016), and will surpass them as the nation’s largest living adult generation next year. Millennials are those born from 1981 to 1996, according to Pew, or adults age 22 to 37 in 2018. So far, they have shown themselves to be more partial to apartment living for more years than their elders, whether for economic reasons or by choice.

Another positive for residential properties: more births. Pew found that among women toward the end of their childbearing years (ages 40 to 44), a total 86 percent had given birth by 2016, an increase from 80 percent in 2006 and about the same share as in the early 1990s. Women also are having more children. On average, women had 2.07 children during their lifetimes in 2016, up from 1.86 in 2006, the lowest average on record.

Good news for student housing: Pew reported that new foreign student enrollment at U.S. colleges and universities doubled between 2008 and 2016, from 179,000 to 364,000. That’s much faster than  overall college enrollment. In 2016, students from China, India and South Korea accounted for more than half (54 percent) of all new foreign students pursuing degrees in the U.S.

In what could be a concerning trend for senior housing, a record 64 million people, or 20 percent of the U.S. population, now live with multiple generations under one roof. That is, a household with two or more adult generations, or including grandparents and grandchildren younger than 25. Many of those people are young adults, but more older adults are also living with their adult children as a way to cope with the inability to save enough to live on their own during retirement.