Economy Watch: Apartment Rents Still Edging Up in Most Cities

By the Editors of Multi-Housing News
February 5, 2018
NationalNews

Smaller cities continue to see the greatest increases, but major markets like those in California still make up the most expensive cities for renters, according to a recent RentCafé report. 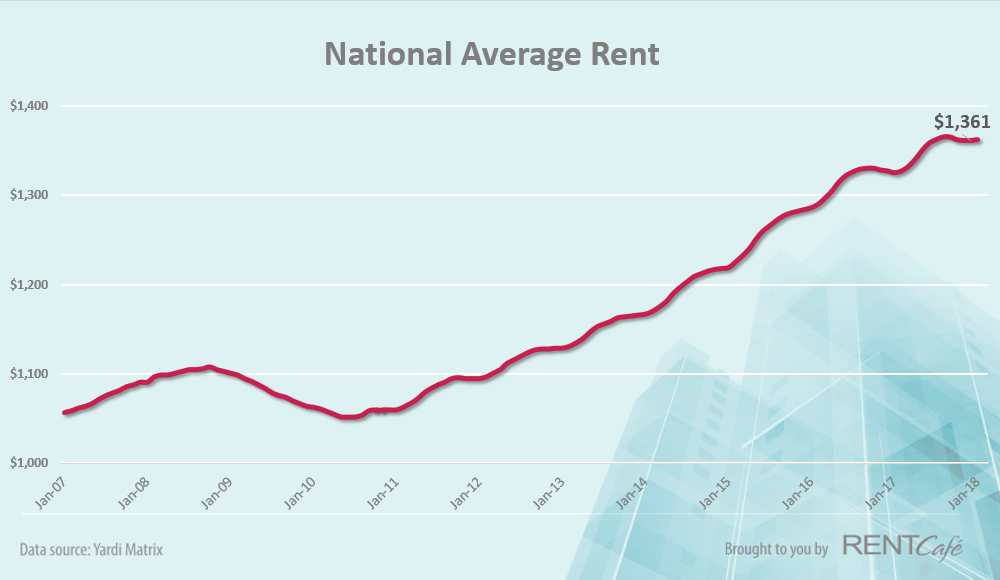 Apartment rents might not be headed upward with the same kind of energy they did in recent years, but there’s still upward momentum in the vast majority of U.S. markets. RentCafé recently reported that 89 percent of the nation’s biggest cities (the top 250 by population) saw rents grow year over year in January, while only 2 percent experienced rent drops.

The national average rent was $1,361 per month in January 2018, RentCafé said, coming in 2.8 percent higher than this time last year. Among individual markets, smaller cities continue to see the greatest increases, with Gilbert, Ariz. (up 8.5 percent), Roseville, Calif. (up 8.5 percent), and Fort Collins, Colo. (up 7.9 percent) all in the top 10, for example. But for year-over-year increases, no markets beat the twin small Texas cities of Odessa and Midland, which saw annual rents increase by 35 percent and 31.4 percent, respectively.

California—know for it’s high rents—has not seen a downward trend in rents in most markets. Prices went up again in January in all five California cities that are in the top 10 most expensive for renters, with the highest rates in the state being in San Francisco, with average rents at $3,448 percent month.

Wichita, Kan., Tulsa, Okla., and Toledo, Ohio, remain the country’s top three most affordable cities for renters, along with seven other Midwestern and Texan towns, where average rents do not exceed $730 per month, according to RentCafé. These cities are Brownsville, Killeen and Amarillo, Texas, along with Independence, Mo., Dayton, Ohio, Fort Wayne, Ind. and the largest city on the affordable list, Oklahoma City. In fact, the markets have been relatively quiet in these parts of the country, as rents remained flat or grew slower than the national average in nine out of the 10 cities.