Despite a spurt of incoming supply, multifamily rent growth slowed down slightly in July. 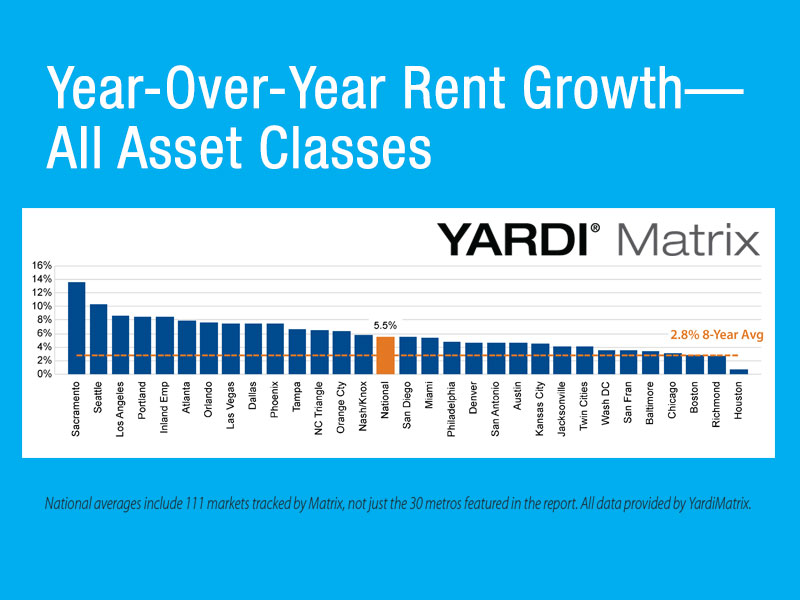 Since the beginning of the year, the multifamily industry has feared that its exceptional period of rent growth is due for deceleration. However, in yet another banner month, average U.S. rents increased $4 in July, resulting in a monthly record of $1,217. On a year-over-year basis, rents increased 5.5 percent, which is 10 basis points less than in June, 60 less than in April and 120 basis points less than the recent peak last October.

According to Yardi Matrix’s monthly report analyzing 121 markets, “July’s numbers show that the big picture about the multifamily market continues to be positive.” Strong demand has been bolstering rent growth nationally, and coupled with strong job fundamentals is leading to increased household formations. Despite increased supply in many metros, occupancy rates of stabilized properties remain at 96 percent overall.

Even though rent growth is consistent, the long-awaited signs of moderation are slowly cropping up. According to the report, recent years have set a precedent of seasonal slowdown during the second half of the year. Considering that rents are up 4.6 percent year-to-date, which exceeds usual full-year expectations, Yardi Matrix expects to see the second-half slowdown this year as well. The report also predicts a significant increase in supply, with 300,000 new units expected for delivery in 2016.

While changes in Matrix’s monthly metro forecast don’t often differ much month-to-month, there are a few surprising changes in the ranking that may or may not be indicative of more extensive trends. For example, rents have grown 3.6 percent in Washington, D.C. during the last 12 months, but 3.55 percent in San Francisco, the top performer when it comes to recent rent growth. San Francisco has seen double-digit growth for most of the past two years, and its average rent of $2,400 is twice the national average.

While San Francisco as a metro is clearly due for some moderation, other typically high-ranking cities are also seeing significant slowdowns. Cities like Denver, Houston and Austin, which are generally economically fueled by the technology and energy sectors, have seen comparatively drastic drops in growth. Denver, which has been in the 8 to 10 percent range of growth during the last two years, has only increased 4.7 percent year-over-year. According to the report, demand is still strong in Denver, but supply is quickly overtaking it. In Austin, growth has increased 4.6 percent year-over-year, but its trailing three-month figures leave much to be desired at 0.3 percent overall and -0.1 percent for the Lifestyle asset class. Houston lags behind even more, with 200 basis points less than the 29th place metro of Richmond, Va. At 0.7 percent year-over-year, Yardi Matrix expects low energy prices and increased supply to keep Houston’s growth level for the rest of the year.