Slated for completion in late 2021, the 68-unit development is located in the Sugar Hill Arts District. 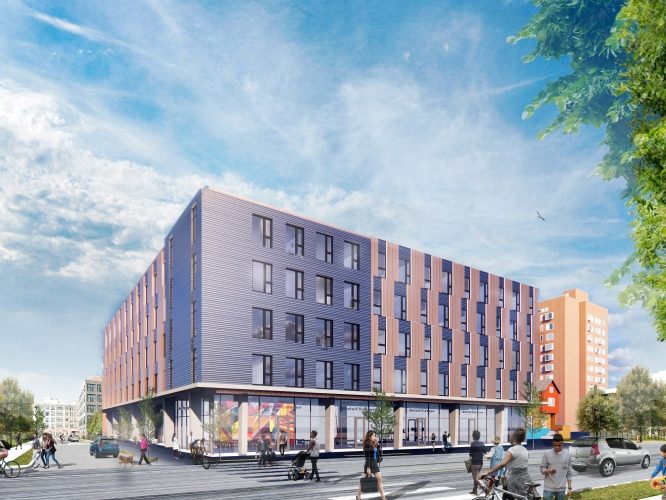 Preservation of Affordable Housing and Develop Detroit, in partnership with the City of Detroit, have broken ground on a 68-unit, mixed-income development in Midtown Detroit’s Sugar Hill Arts District. Dubbed Sugar Hill, the $36.3 million project is slated for completion in late 2021. The development team includes Perkins + Will and McIntosh Poris as architects, while Whiting-Turner is the general contractor.

One of the last projects of Phil Freelon, who passed away in 2019, Sugar Hill will take shape at the northwest corner of John R and Garfield streets, in a Michigan Geographically Disadvantaged Business Location. Upon completion, the five-story building will include 11,900 square feet of retail and 164 parking spaces for residents and the public. Midtown Detroit Inc. will develop an adjacent green space that will connect with other Midtown “green alleys.”

The community will house studio, one- and two-bedroom floorplans ranging from 475 to 1,000 square feet. Of the total, 14 apartments will be set aside for residents earning from 30 to 60 percent of the average median income, including homeless veterans served by the HUD-VASH program.

The 1-acre development site is roughly 2 miles north of downtown Detroit, across from the John D. Dingell VA Medical Center and near the Museum of Contemporary Art. The surrounding area includes several hospitals, but also various shopping, dining and entertainment venues. The community will be 3 miles from an ongoing $25 million redevelopment which will include 40 affordable units.

The City announced the Sugar Hill revitalization project in 2017. At the time, the community was supposed to have 84 apartments, 7,000 square feet of retail and 300 parking spaces. Development plans later downsized and the project kicked off almost two years later than planned.

Sugar Hill has various sources of financing. The City of Detroit provided $2 million in HOME and $1.7 million in community development block grants, as well as a $6.7 million Section 108 loan for the parking structure. The Michigan Economic Development Corp./Michigan Strategic Fund awarded $4 million from the Community Revitalization Program and $2.3 million in Michigan Brownfield tax credits.

Other funds include $9.8 million in New Market Tax Credit equity from PNC Bank, a $4 million first mortgage from PNC Bank and $5 million in financing through Prudential Financial, $250,000 from the Home Depot Foundation for veterans housing and $300,000 in social impact financing from the Quicken Loans Community Fund.