The Howard Hughes Corp. (HHC) is perhaps best known for its massive single-family master-planned communities and destination retail assets. This certainly makes sense, given that over 320,000 individuals call a HHC community home. The company, however, has begun a new phase of growth aimed at creating walkable, highly dense urban nodes within (and outside of) their master-planned developments.

“It is an exciting time as a company,” says Grant Herlitz, president of The Howard Hughes Corp. “Our goal is really to become the next great American company of the 21st century. And we have the real estate platform and the assets to do it.”

When HHC was spun off from General Growth Properties (GGP) in 2010, leadership set out to develop a strategic plan for each of their 35 assets located across 18 states. These holdings were not the type of income-producing assets that a typical REIT like GGP would be interested in holding. Rather, they were development assets suited for a variety of uses that extend far past homebuilding.

Take Summerlin, 22,500 acres of land that Howard Hughes named after his grandmother, Jean Amelia Summerlin, when he acquired the tract in the 1950s. Today the master-planned community is home to approximately 100,000 people, and The Howard Hughes Corp. is set on giving them an urban center. This October, the company begins opening 1.4 million-square-feet of retail and 200,000 square feet of office situated on 400 acres that is already home to the Red Rock Casino Resort & Spa. Tying all the asset classes together is a 124-unit luxury apartment that HHC is building in a joint venture with The Calida Group. It is the first multifamily development in what is now known as Downtown Summerlin. 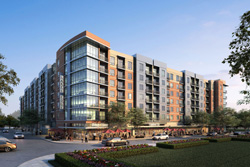 “We were originally slated to call the portion The Shops at Summerlin,” Herlitz says. “We changed the name to Downtown Summerlin, which evokes an image of people walking the streets mingling, and all of these product uses coexisting together.”

The company is executing a similar strategy at another one of its famous assets, The Woodlands. The self-contained mixed-use master-planned community is situated on 28,400 acres (that’s 1.5 times the size of Manhattan) about 27 miles north of Houston. At year-end 2013 there were 40,618 homes and nearly 108,000  residents.

“Some of The Woodlands natives have been here since the 1970s and are now having grandkids. They’re looking to downsize from their larger houses into multifamily that is adjacent to our retail product,” Herlitz says.

The Howard Hughes Corp. had previously partnered with The Dinerstein Companies to develop a two-phased multifamily development in The Woodlands called Millennium. The second phase of the 707-unit asset is currently under construction.

While there is office, apartment, retail and hospitality product already within The Woodlands, HHC is currently working to create a denser, walkable development within the community known as Hughes Landing. The 66-acre mixed-use site situated on Lake Woodlands will feature 800 units of multifamily, 2.5 million square feet of office, a limited service hotel and 250,000 square feet of retail that will include a Whole Foods Market and a restaurant row. A 390-unit development known as One Lake’s Edge began leasing this fall with first occupancy slated for early 2015.

While downsizing empty nesters have an easy decision relocating to the pet-friendly One Lake’s Edge due to its luxury finishes and walkable location, HHC is using technology to attract Millennials to north Houston. Units feature smart locks that open via smart phones, as well as Nest “learning” thermostats. A restaurant row with fine and casual dining also ensures that both Boomers and Millennials can find a meal that suites their taste and budget.

Travel 1,200 miles northeast and you will arrive at another iconic property where HHC is adding an urban center to cater to changing demographics. Located equidistant of Baltimore and Washington, D.C., Columbia is a planned community in Howard County, Md., with 10 self-contained villages that are home to roughly 100,000 people. James Wilson Rouse, a pioneering real estate developer and founder of The Rouse Co., began to craft Columbia in the early 1960s with the idea that a new city should be a multifaceted city, not just a bedroom suburb.

“Part of what we think of as a real city is something with a vibrant, mixed-use downtown,” says Greg Fitchitt, vice president of development at The Howard Hughes Corp. “That is the one piece of Rouse’s vision that didn’t come about during the first 40 odd years. The downtown is essentially comprised of mid- to high-rise office product that is largely surface parked—certainly not what we consider a walkable community.”

While each of the existing villages has a grocery store, Downtown Columbia opened its first, a Whole Foods Market, in mid-September. The first downtown apartment asset—a 380-unit Class A joint venture with local developers Kettler and Orchard Development—will begin leasing in October. The two will also partner on a second, 437-unit community, though Herlitz ultimately sees HHC building out its own development team in Columbia. As with The Woodlands and HHC’s Hawaiian developments (which we’ll get to in a minute), the company will bring in local joint-venture partners for help on the initial projects before establishing their own development teams for subsequent phases.

The real Maryland magic will happen on the 22 acres within Downtown Columbia that forms a crescent around the Frank Gehry designed Merriweather Post Pavilion—an outdoor venue that has hosted Jimi Hendrix, Janis Joplin, Led Zeppelin, The Grateful Dead and Katy Perry.  Of the 5,500 units being built downtown, 2,300 will be in the crescent. The underdeveloped land provides a blank slate for HHC to create a modern, 24-hour downtown environment. Plans currently include a town square with green space and possibly an ice rink. HHC has also been in talks with Howard County about the possibility of putting in a library. There is also the potential for a more intimate indoor concert hall that would complement Merriweather.

“People feel like they have to make a choice between a suburban environment—which has schools, parks and recreation, and is good for families—and a place where there is more activity, nightlife and walkability,” Fitchitt says. “We believe that what we are creating in Columbia will be the best of both worlds.”

A master planned community in the sky

While denser communities are in favor with renters on both sides of the age spectrum, such assets are a smart way to accommodate population growth without contributing to sprawl. HHC’s arguably most innovative project, Ward Village, will spring up on 60 acres situated directly between downtown Honolulu and Waikiki on Oahu. When the Hawaii Community Development Authority-approved 15-year master plan is complete, a 665,000-square-foot shopping district known as Ward Center will have been transformed into the largest LEED-ND Platinum-certified neighborhood in the U.S. with 4,000 residential units, up to 1.5 million square feet of retail, and a four-acre park that connects with a planned rail stop.

“We have this amazing opportunity with 60 acres of what is really the best development opportunity in Hawaii,” says Nicholas Vanderboom, the senior vice president of development at The Howard Hughes Corp. tasked with leading the company’s Hawaiian business. “It is something that we are very fortunate to get to work on, but there is also a big responsibility to do it right.”

The first phase of development at Ward Village involves three residential towers. The first two towers, Waiea and Anaha, will feature 171 and 311 market-rate units, respectively. The third tower will feature all 424 units, 85 percent of which are categorized as workforce housing as there is a 20 percent affordable requirement for Ward Village. Presales at Waiea and Anaha launched this year. As of Aug. 1, the first two towers are 72 percent sold. HHC broke ground on Waiea in June, and will begin Anaha late this year. Construction is planned to commence on the workforce tower in 2015. Whole Foods Market will also be opening its largest location in Hawaii directly across the street from Anaha.

These are not the first condo units that HHC has built on the island. The company partnered with two Honolulu development firms—The MacNaughton Group and Kobayashi Group—on One Ala Moana, a 206-unit condo that is now sold-out with a competition date set for the year-end. With this previous experience and a team of 15 in Honolulu, HHC is ready to tackle Ward Village.

But this doesn’t mean that local (and international) input was not implemented in the design. According to Vanderboom, HHC first tapped James K. M. Cheng, the Canadian architect largely responsible for Vancouverism, to design the first two towers and set the tone for the master plan. Solomon Cordwell Buenz (SCB) provided additional input on the market rate product. Los Angeles’s AC Martin was the design architect on the workforce tower. In all three cases, each firm partnered with a local architect that served as the architect of record.

“Our goal was to bring the best talent from around and even outside the country, and pair them with the best local firms who understand the local context,” Vanderboom says.

Part of the challenge was creating a workforce tower that fit in with the luxury product. While clever affordable design has become harder to discern from market-rate work in recent years, HHC is taking the trend a step further by crafting the entire workforce building with a glass curtain wall that offers floor-to-ceiling views.

“What we are trying to do is integrate the different income levels so that they live together harmoniously,” Herlitz says. “Essentially we are building a master planned community in the sky.

History of The Howard Hughes Corp.

The Howard Hughes Corp.’s roots go back to 1909 when Howard Hughes Sr. patented the “rock eater” drill bit that revolutionized oil well drilling during the Texas Oil Boom. The company was incorporated as the Sharp-Hughes Tool Co. in 1913, and was renamed Hughes Tool Co. when Hughes bought out partner Walter Sharp in 1915.

The Howard Hughes Corp. was effectively formed in 1972 under the name Summa Corp. when the oil tools division of Hughes Tool Co., then owned by Howard Robard Hughes Jr., went public on the NYSE. The remaining businesses had to adopt a new name, and Summa (Latin for higher) was chosen. When Howard Robard Hughes Jr. died in 1976, his successors sold off most of Summa’s business lines, including Hughes Air Corp. The new leaders at Summa refocused on real estate, and benefited from the sheer amount of undeveloped land Hughes had amassed around Las Vegas (Summerlin).

Howard Hughes Corp. at a Glance