The 132-unit single-family rental community marks the company’s sixth purchase in the metro. 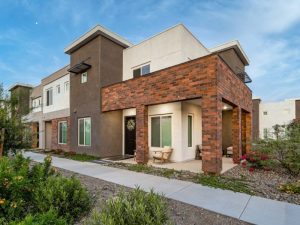 Decron Properties has bought the 132-unit BB Living at Eastmark in Mesa, Ariz., for $76 million, from BB Living. The new owner plans to rebrand the property as Reserve at Eastmark.

Built in 2020, the community has three- and four-bedroom townhomes with attached two-car garages, ranging from 1,584 square feet to 2,205 square feet, according to Yardi Matrix data. Each unit features high-end finishes, a smart home system, as well as a washer and dryer. Community amenities include a pool, basketball court and clubhouse.

Located at 5150 S. Inspirian Parkway, the property is some 6 miles east of Phoenix-Mesa Gateway Airport and some 3 miles southeast of Dignity Health Arizona General Hospital Mesa.

Reserve at Eastmark is Decron’s sixth acquisition in 2021, bringing its total transaction volume to $570 million, outpacing its previous record of $345 million in acquisitions in 2018. The company now owns 1,482 units in the Phoenix metropolitan area.

The 256-unit Arrowhead Ranch in Glendale, Ariz., was among the latest properties Decron purchased. The company’s CEO, David Nagel, said in prepared remarks that they intend to use the same investment formula to grow in other markets. He added that the company is interested in buying residential properties in Austin, Texas and Salt Lake City, Utah, due to their lower cost and strong tech talent in-migration. The company also plans to continue to invest in build-to-rent assets in other Phoenix submarkets, but also in Sun Belt cities.