With funding through Freddie Mac, Community Preservation Corporation has closed on a $40 million loan for the refinancing of Cathedral Parkway Towers. Refinancing helps prevent otherwise unavoidable rent increases that would have resulted from escalating operating costs at the 309-unit Mitchell-Lama project on West 110th Street in New York City. 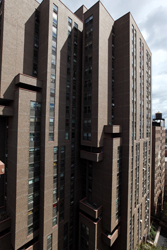 The $40 million Freddie Mac loan will maintain affordability by refinancing the existing $35 million mortgage and covering other costs. The rest of the loan proceeds will go into a reserve account held by the New York State Department of Housing and Community Renewal (HCR).

“What is unique to the Mitchell-Lama program is they are regulated by the state’s HCR, which reviews their budget every year and approves rent increases,” CPC Director of New York City and Long Island Region Robert Riggs told MHN. “But because building residents, through the tenant organization, are owners, their priority is to maintain affordability and delay rent increases.

“They go five or six years between rent increases. During that time, expenses increase, but revenues don’t, so they go from running surpluses to running deficits. All their surpluses go into reserves held by HCR, and when they begin running deficits they use those reserves. But at some point, rent increases are necessary. They’re responsible owners, and they have a record of increasing rents when necessary, most recently in 2004 and 2009.”

In 2014, he added, increased rents would have been imperative in the absence of reduced expenses. By refinancing, rent increases were forestalled. “But a private owner would have refinanced and increased rents,” Riggs said.

Lower interest rates and more favorable terms compared to standard products are among the advantages of the Freddie Mac product. Annual debt service repayments will be lowered by as much as $1 million as a result of the refinance.

Another feature of the development is a 7,200-square-foot commercial space leased for free to a non-profit preschool that serves residents of the apartments.

There is a lack of affordable housing in the United States and rents are rising faster than incomes for working families, added Shaun Smith, senior director of Freddie Mac Multifamily. “Initiatives like this help preserve affordable rental housing and could not be done without the coordination of many public and private entities like CPC and HCR,” Smith said.

Added Darryl C. Towns, commissioner and CEO of New York State Homes and Community Renewal, “The refinancing of Cathedral Parkway Towers is a study in how critical the dynamic partnership is between the non-profit and government sectors in preserving affordable housing.

“This key refinancing extends affordability and allows this landmark building to stay in the Mitchell-Lama program. Under the Governor’s leadership, HCR is working closely with our partners to strengthen communities and opportunity across the state.”

Since Cathedral Parkway Towers opened in 1974, the Morningside Heights neighborhood in which it is located has become a very strong residential market, and this property is “an island of affordability there,” Riggs said.

“[Residents] will maintain the affordability while not compromising the quality of the asset. That building looks fantastic, and it will continue to look fantastic. They now have the revenue to maintain the building they live in and own. This is really to the credit of the tenant organization and the owners. They have been responsible and forward thinking.”