(This story originally ran in the June 2015 issue of Multi-Housing News.)

Talk about a bounce back. Just six years after hitting rock bottom, and we are looking at over 20,000 condo units on the boards in Miami. Yet questionable site selection, rising construction costs and global currency dynamics have experts expecting the first shelved Miami condo project within the next six months. Thankfully, the nature of the preconstruction business model should help us avoid the dramatic craters South Florida is famous for in its boom and bust cycles.

A major differentiating factor between the current and past cycles is that there is now far less leverage being used to build. Condo developers require up to a 50 percent down payment from preconstruction buyers—roughly 90 percent of whom are foreign (six out of every 10 condo buyers are from South America1). These buyers are not living in the properties, as evidenced by the approximately 60 percent of units back on the market within 90 days of delivery as either re-sales or rentals2. While it is hard to find the employment or population drivers for all the ground that is breaking, in terms of strict economics, the demand from investors is there.

“The money is sitting in the developers’ bank accounts before they ever break ground,” said Jake Roffman, principal at Miami-based value-add and opportunistic development firm 13th Floor Investments. “The demand side of the equation is solved before you ever spend real money on the development, which is a unique twist this time around.”

Don’t expect this cycle to end in traditional bust fashion. Crashes for the most part are fueled by overindulgence in debt. If developers are gorging on anything this time around it’s speculative land buys.

“We are running out of land, and developers are turning to non-waterfront, inland locations in transitional neighborhoods,” said Tony Graziano, principal of Integra Realty Resources, a commercial real estate consulting and valuation shop. “There are now projects being conceived on sites that are not what we would call prime.”

This is a lesser evil compared to taking on debt since the result of a bad bet is a vacant piece of land, not a half-built or vacant tower.

“If a project is shelved before it gets built, that is a success in that it isn’t flooding the market with inventory that is not well received,” Graziano added. “Yes the market is slowing, but that is a sign of a healthy market.”

Yet Graziano considers rising land prices the second biggest factor slowing down the pipeline. Rising construction costs takes the cake as the greatest factor determining whether currently selling or proposed projects will move forward in upcoming months. While updating an annual study for Miami’s Downtown Development Authority, Graziano found construction costs have increased 25 percent over the course of the cycle as of March 2015.

“Basically, the contractors are seeing guys making money, and they are raising costs,” Graziano said. “They are busy—it’s a simple case of supply and demand.” 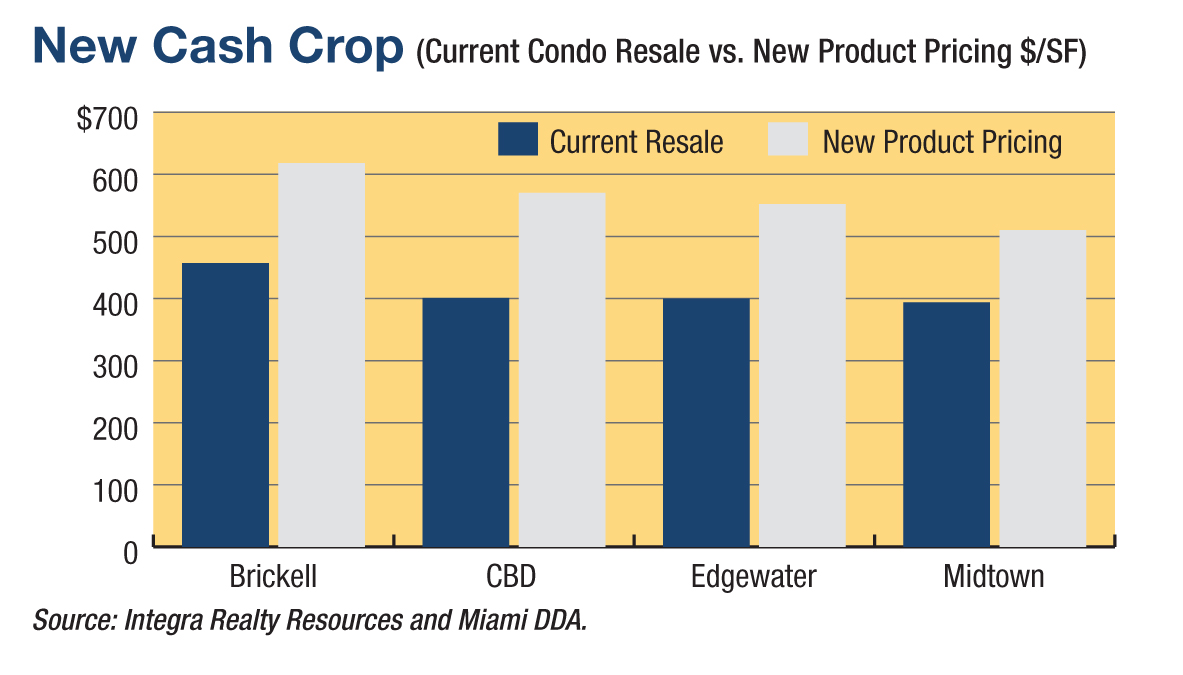 Combine more expensive land and contractors with the dwindling purchasing power of Central and South American currencies, and developers might soon have a hard time finding enough preconstruction contracts to make a deal pencil out. With summer being the typical buying season for Latin American investors, a marked market shift may manifest shortly. 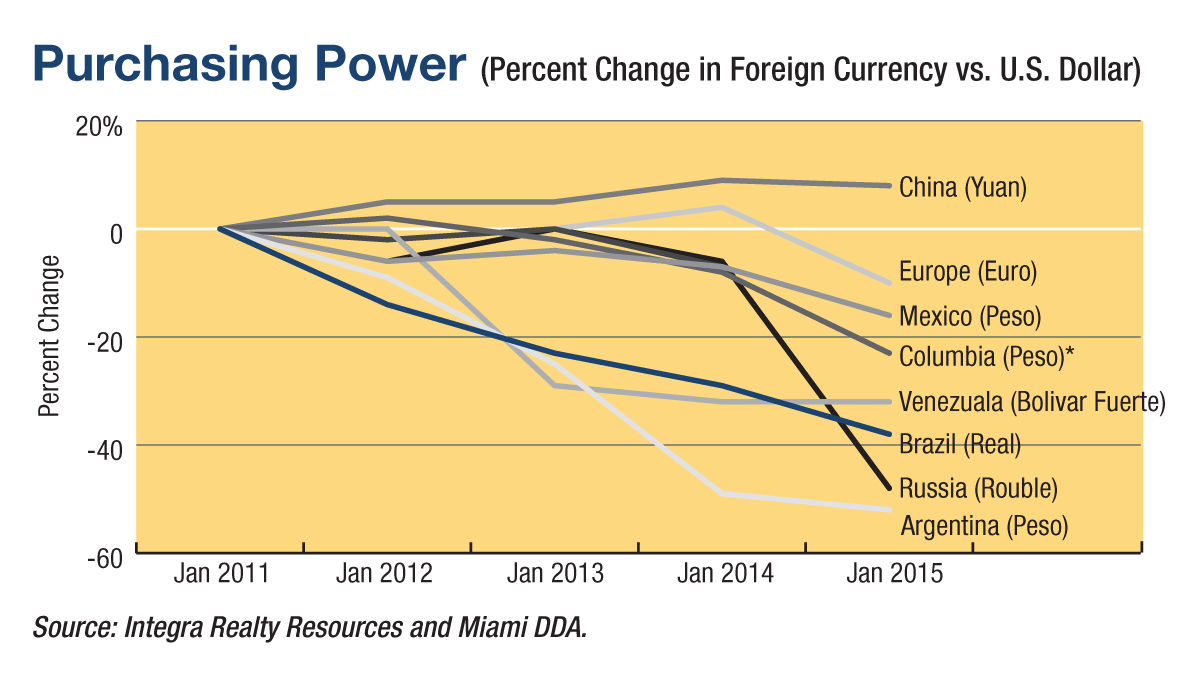 “Foreign currencies are weakening, and this is really the time for many developers who have been on the fence to decide how they are going to go forward,” said Peter Zalewski, a principal with the Miami real estate consultancy Condo Vultures who also runs preconstruction condo research site Crane Spotters in conjunction with the Miami Association of Realtors. “You will start to hear in June, July and August that some projects aren’t going forward. Some might be reworked. This is really the summer of shakeouts.” 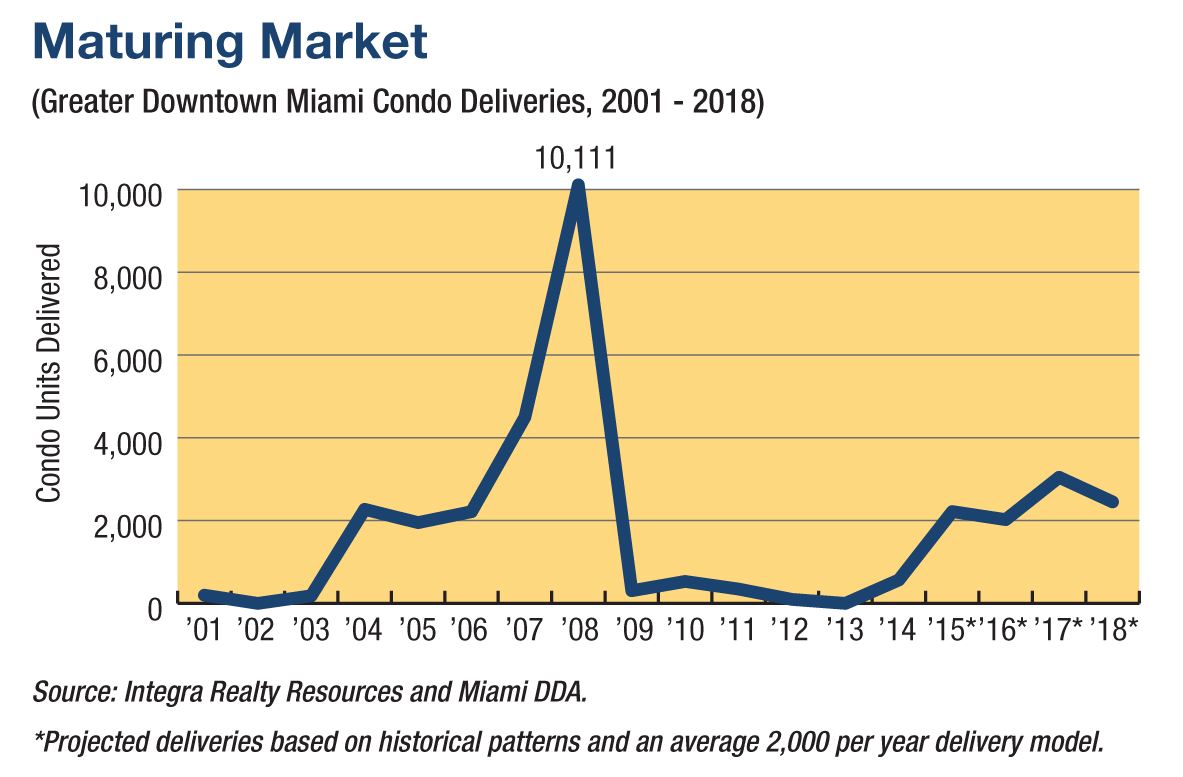 Again, don’t expect the pipeline to shut off. Compared to last cycle, today’s developers are armed with the data and technology needed to make educated decisions. Zalewski added that better barometers may lead to an extended cycle. Some builders may sit on the sidelines with a piece of land and a design while the market catches up to delivered inventory. In 12 to 18 months they may start a sales program again. In the meantime, buyers recently priced out of Miami proper may decide to look north to Palm Beach and Broward counties where prices are typically about $400 a square foot less than in Miami-Dade ($495 and $482, respectively, versus $952 in Miami-Dade).

“They can’t buy the Bentley anymore, they are going to buy the Mercedes,” Zalewski added.

On the flip side, poorly performing Latin American economies could lead to a flight towards safety.

“Purchasing power is declining at the same time as they want to get their money out as quickly as possible,” Roffman said. “I have no way of predicting how this plays out, but I think you are still going to see a lot of money that is looking to escape politically corrupt economies. When you are a Latin American investor, there is no place you would rather be than Miami.”

Such a dynamic has condo owners wondering if they should put their unit on the market while prices are still high. This is one factor contributing to roughly 15 months of condo inventory in Miami—a balanced market is in the six month range. Going forward, the climate should shift toward a softer time for sellers and landlords, and a more opportunistic time for buyers and renters.