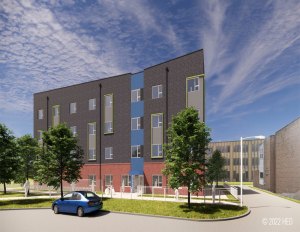 Interfaith Housing Development Corp. has broken ground on the Conservatory Apartments, a 43-unit affordable housing project that is aiming to be Chicago’s largest multifamily building to meet the Passive House Certification.

The property, located just north of the landmark Garfield Park Conservatory, will serve two populations in need of permanent, supportive housing. Of the 43 units, 34 will target individuals who are chronically homeless and who have a disability. Nine will be set aside for persons from the Illinois State Referral Network. IHDC is partnering with Deborah’s Place, a nonprofit supporter of housing and services to persons who have experienced homelessness, and Trilogy Behavioral Health, a comprehensive integrated care agency that enables people in mental health recovery to build meaningful and independent lives.

Conservatory Apartments was designed by HED, a national architecture and engineering firm that has previously worked with IHDC on affordable housing developments with aggressive sustainability goals. Locally based Henry Bros. Co. will be the construction firm for the project.

Susan King, sector leader with HED & principal in charge of the Conservatory Apartments design team, said in a prepared statement IHDC has two goals. First, designing the building to meet Passive House Standards and achieve Passive House certification through the Passive House Institute of the United States. It is a passive house standard the combines thorough design verification protocol with a stringent QA/QC program to deliver better buildings. The second goal has already been met—being selected to participate in the Living Building Challenge Pilot Program for affordable housing.

The design team participated in a biophilic design workshop which guided the interior design. The team used the simulation of natural forms throughout the interior through light fixtures and patterned glass. Team members also incorporated a low maintenance moss wall in the building lobby as a way to bring outside nature into the building. It’s also a nod to the namesake conservatory a block away. The approach will enable the apartment property to tell a story about nature that will tie it to its place and time.

Achieving the PHIUS standard will be significant because it will show the goals can be attained in a region with a demanding four-season climate. It will also send a message about the necessity for affordable housing to prioritize resident and environmental health through innovative design. The only other affordable Passive House that is certified in Chicago has six units.

In recent years, Passive House standards have been become more popular in the United States as an uncompromising construction method to meet rigorous codes and significantly lower greenhouse gas emissions.

To meet the PHIUS goals, the building will be equipped with a variety of energy-saving features including 14kW photovoltaic systems, energy-saving appliances and lighting. Water-saving plumbing fixtures will help reduce indoor water use by 25 percent. The apartment building will be transit-oriented as it will be less than 1,500 feet from the Conservatory green line stop. The building must also comply with the ComEd energy efficient guidelines.

IHDC, a longtime Chicago-based nonprofit community housing development corporation, provides long-term affordable housing for low-income, underserved populations in collaboration with local communities. In its 30-year history, IHDC has created 19 affordable housing developments that range in size from 12 to 135 units totaling 1,060 affordable rental units throughout the metro region. Most of the properties serve the special-needs population.

In January 2020, IHDC began construction on a $19.3 million, five-story, 72-unit development in Maywood, Ill., a Chicago suburb about 12 miles west of downtown Chicago.

HED was also the architect of record for the 33,000-square-foot building located on a lot formerly owned by the village. It serves low-income families and individuals with incomes under 60 percent of area median income.

Other projects in the region include Ogden Park Apartments, which provides 25 units of supportive housing in the former St. Brendan’s Parish convent in the West Englewood neighborhood in Chicago.