One of the more puzzling high-profile development projects of recent years is reportedly still on track for development after China Broad Group held a groundbreaking event for its world’s tallest building plan. 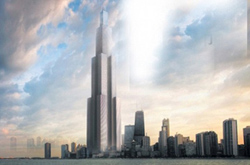 Hunan Province, China—One of the more intriguing high-profile development projects of recent years is reportedly still on track for development after China Broad Group held a groundbreaking event for its world’s tallest building plan. The company has previously proven its revolutionary prefab technology, which allows for major structures to be erected within days, and has previously voiced its intention to construct a 220-story building in a 90-day interval. Since then news of the project has slowed down but the structure dubbed Sky City One is apparently back on track with a reported budget of around $850 million.

The 90-day timeframe was extended for the project in its current form to approximately nine months. The change in timeframe will include the 120 days it will take the company to produce the prefab components necessary for the construction process. The Burj Khalifa, presently the world’s tallest building at 2,722 feet, was completed after a five-year-long process and an investment of around $1.5 billion. Sky City One, previously dubbed J220, would shatter that construction schedule using its prefab technologies, and would be 27 feet higher than the Burj Khalifa.

The project will serve around 30,000 people offering office, residential and retail components, as well as a hospital, schools and a vertical garden that could support most the population inside. The project hopes to reduce the need for cars and trains as it will provide everything residents need including workplace proximity. This keeps the environmentally conscious direction that Broad Group has taken during the past decade.

Sky City One is a peculiar project given its unconventional construction technology and seeming unpreparedness; WorldPropertyChannel.com recently pointed out the wave of skepticism that the project has produced in the architectural world. However, Broad Group insisted that its prefab technology is sound and has passed thorough testing in the wind tunnel.