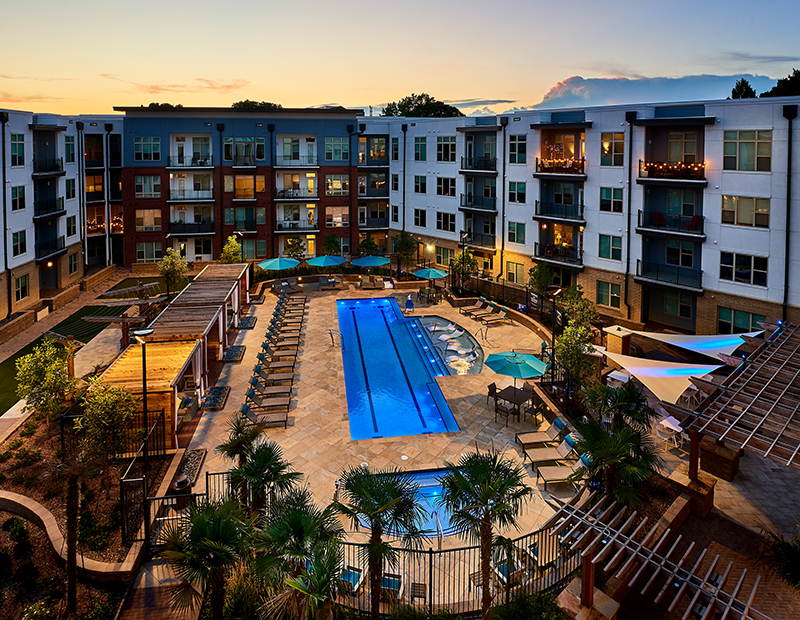 Northland Investment Corp. has snapped up a 369-unit luxury community in the SouthPark suburb of Charlotte, N.C., for $145 million, marking one of the largest single-asset deals in North Carolina’s history. The property, Inspire SouthPark, was completed last year by Morgan Bond Co., a joint venture of Bond Cos. and Morgan Holdings.

The community is located at 345 Sharon Township Lane, about 4 miles south of central Charlotte. Apartments range in size from studios to three-bedroom layouts with high ceilings, patios, upscale finishes and built-in wine coolers. The development features a plethora of luxury amenities including a pool with cabanas, two-story fitness center, wellness center with saunas and massage room, social hall that serves beverages and onsite canine day care.

Situated in one of Charlotte’s most affluent neighborhoods, the property is steps away from the SouthPark Morrison retail center and just down the road from SouthPark, an upscale shopping mall with more than 150 stores. The 91,762 residents within a 3-mile radius of the asset have a median household income of more than $89,000.

Apartment demand continues to soar in Charlotte, with average rents growing by 4.7 percent year-over-year through August despite an aggressive pace of development, according to a recent Yardi Matrix report. Nearly 4,500 multifamily units came online during the first eight months of 2019, with another 13,700 units underway. Investment volume for the year is likely to exceed $2 billion.