The community has 10 planned uses, among them market-rate and affordable housing. 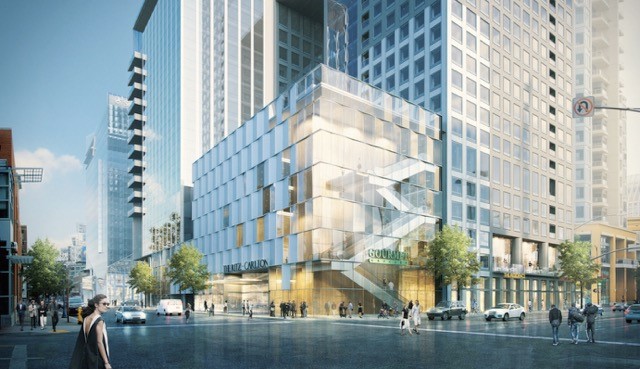 San Diego—City officials have green lighted a new landmark tower in San Diego. The community has 10 planned uses, among them market-rate and affordable housing.

Slated for a downtown parcel nestled between the Gaslamp Quarter and East Village neighborhoods, the $400 million high-rise project called 7th & Market has been designed by architect Carrier Johnson + CULTURE for client Cisterra 7th & Market LLC. In addition to residences, the development will include among other uses a Whole Foods grocery store, the city’s first Ritz-Carlton Hotel, office space and public parking.

Being termed the “biggest and densest” building in the county, 7th & Market will soar 39 stories in height and feature multiple rooftop terraces, a variegated facade communicating its multiple uses and an attention-getting horizontal span at its highest points.

Completion is scheduled for October 2021.

The project’s design is strongly influenced by the existing historical building on site, as well as the desire to maximize views into Petco Park, the home stadium of Major League Baseball’s San Diego Padres, and nearby surrounding downtown areas.

Three balconies face south, providing perspectives on the ballpark and beyond that to San Diego Bay, Coronado and Point Loma on the Pacific Ocean. The floor-to-ceiling windows that distinguish the lobby provide views to a richly manicured landscaped plaza featuring a green plant wall and sculptural furniture.

The project team conceived the building’s base and lobby as creating light, open and virtually transparent connections to the outside public zones.

“As urban architects, we seek to integrate with the existing city fabric,” said Gordon Carrier, FAIA, founder and design principal for Carrier Johnson + CULTURE. “We do so with an intent to enhance the pedestrian experience, offering multiple uses at the street, and the inherent energy they create.”

“This is exactly what we should be doing in downtown San Diego,” added San Diego City Councilman Todd Gloria.

In a statement, Cisterra 7th & Market LLC reported that good design is important “both for the benefit of the project and for the enhancements it provides to the mosaic of the city. The design of this tower will create an iconic structure to anchor the East Village, and enhance the overall design quality of the city.”