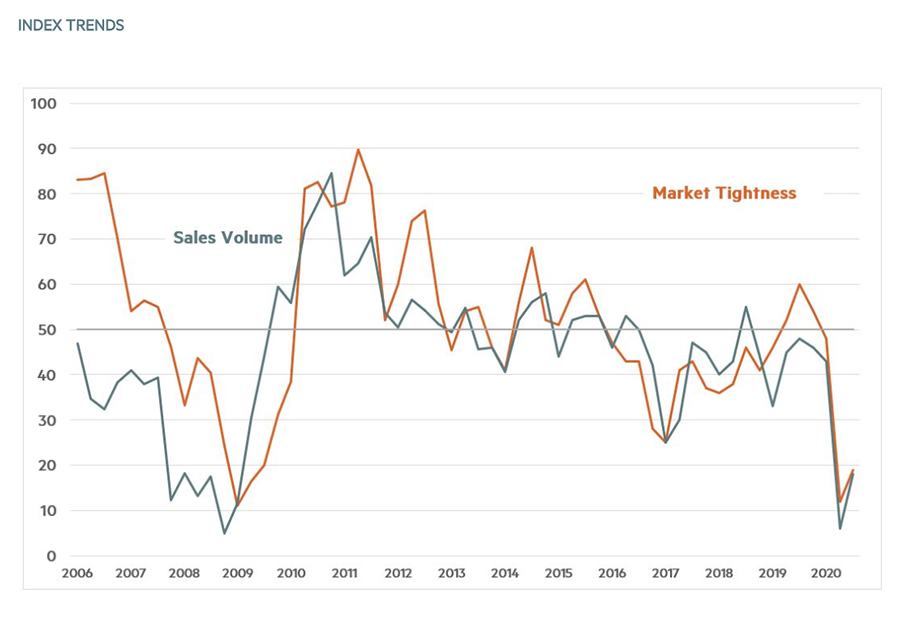 More than two-thirds of multifamily executives in the U.S. report weakening market conditions compared to 3 months ago, marking the second straight quarter of deterioration as the industry continues to grapple with the fallout from COVID-19, according to the latest survey by the National Multifamily Housing Council (NMHC).

The quarterly survey finds that 71 percent of CEOs and senior executives of apartment-related firms find conditions in local multifamily markets to be “looser” than 3 months ago (“tight” markets are those with low vacancies and high rent increases). This figure was down slightly from the 82 percent that reported looser conditions in April’s survey, when jobless rates were surging due to the pandemic and widespread business closures.

Owing to the Federal Reserve’s efforts to shore up the economy with aggressive monetary easing, more respondents (44 percent) reported favorable pricing for debt financing than not (25 percent). NMHC Chief Economist Mark Obrinsky noted in a statement, however, that these improved borrowing conditions are mostly confined to stabilized multifamily assets, with underwriting standards remaining fairly stringent.

Equity financing for apartment acquisition or development was also seen to be less available than 3 months ago by 49 percent of respondents, compared to 16 percent who said it was more available. This marks the second consecutive quarter of worsening equity conditions. At the same time, nearly three-quarters of respondents said that sales volume of apartment properties in their markets is down compared to 3 months ago, with only 4 percent seeing an uptick.

Although rent collection is holding relatively steady in the multifamily sector, many apartment residents have asked for and been granted short-term lease renewals. Slightly more than half of respondents to NMHC’s survey anticipated difficulties from a possible wave of lease expirations during the summer leasing season but said they expect new lease-up activity to remain healthy or renewals to continue at an above-average rate (or both).

On the other hand, 30 percent of respondents are bracing for a much more difficult leasing season, with more expirations than usual and uncertain rates for renewals and new leases.