At NMHC's OPTECH Conference & Exposition in Las Vegas, Kingsley Associates debuted the results of the 2017 Resident Survey Report. From rent payment methods to online reviews, the report covers what features and amenities today's renters are expecting, as well as the latest issues hitting the apartment industry.

From rent payment methods to online reviews, the survey covered what features and amenities today’s renters are expecting, as well as the latest issues hitting the apartment industry.

The survey participants were made up of 40 percent male and 60 percent female, with the largest household income (39 percent) landing in the range of $50,000 to $100,000 annually. When it came to age, the highest percentage of those surveyed were between 25 and 34, at 40 percent. The report surveyed those in a variety of rental categories, with 38 percent living alone, followed by 26 percent living with a partner or spouse. Majority of rental rates were between $1,000 to $1,300 at 24 percent, followed by 21 percent spending $1,300 to $1,600 per month.

Here are the top four takeaways from the survey reveal:

While some in the multifamily industry might argue that newer features such as swimming pools, fitness centers, clubhouses and entertainment amenities top the list of must-haves for today’s renter, many might be surprised by the practicality of what made the top 10 list. Air conditioning, high-speed internet access and reliable cell reception were the three most-wanted amenities from participants. Rounding out the list were: 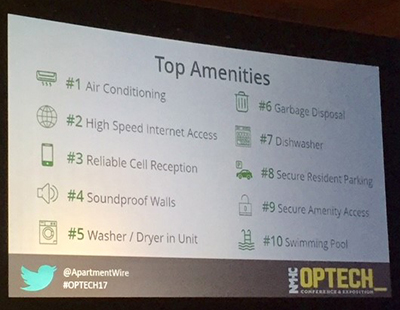 A whopping 55 percent of those surveyed said they checked cell reception while touring a community and 40 percent actually use a cell phone as their primary apartment search device. This amount rose 5 percent from the last survey in 2015 and 20 percent from 2013. In addition to cellular connectivity, residents also said utilizing these newer technology services is something they look for in communities, with 73 percent stating they would use a management app if it was available.

Mailing in rent checks is becoming a thing of the past. Although property managers might see this as a more secure method for rental payments, residents see this as a more complicated step and are looking for easier alternatives. Online community portals are proving to be a preferred method, where residents can pay rent using a bank account or debit card. Twenty-five percent said they look for the payment option of debit card with no fee, whereas only 13 percent currently are given that option. On the other hand, only 8 percent said they would still be interested in hand delivering a check, but 16 percent are currently forced to do that now. When it comes to lease renewal, 42 percent prefer the online-only method, with 30 percent wanting to handle it face-to-face.

“We need to alleviate the time and money that is spent in processing payments. Managers should be finding easier solutions for residents and eventually the ideal situation is to get everything electronic,” said Freitas.

“There is also a regional and demographic difference when it comes to payment methods. Renters want the money to get out as quickly as possible,” added Zacher. 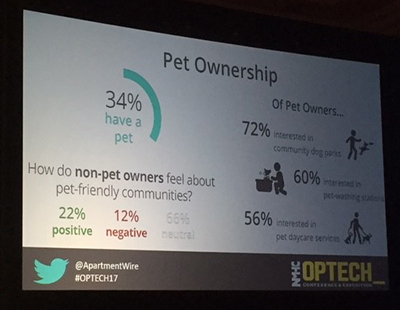 Having a pet is no longer something renters will be forced to compromise on, with 34 percent of participants already owning one. Of those pet owners, 72 percent were most interested in having a community dog park, followed by 60 percent wanting a pet-washing station and 56 percent being interested in a pet daycare service. Limiting communities to not service pets can leave a negative effect on a community. Although there are general concerns when it comes to cleanliness, damages or noise, of the non-pet owners surveyed, 22 percent said being pet-friendly community was a positive and 66 percent were neutral, meaning a total of 88 percent wouldn’t object to having pets on the property.

If people rely on reviews to help them make a decision on what store or restaurant to visit, the same can be said for what community to live in. Of the total participants surveyed, 63 percent referenced an apartment opinion site during an apartment search, with a whopping 72 percent saying something they read stopped them from visiting a community. Review responsibilities don’t only fall on the renters shoulders, but the managers as well, who should be actively responding to these opinions, whether they are good or bad. Forty-two percent said they expect to see management respond to all online reviews and 39 percent said they should at least respond to negative ones to try and alleviate the problem.

“These numbers shouldn’t be surprising. Online reviews need to be a larger focus because it’s just as much about prospective residents as it is about retaining current ones,” said Swaback. “This is about social listening and having a method of best practices when it comes to monitoring reviews and being consistent with how you want your community to be seen.”