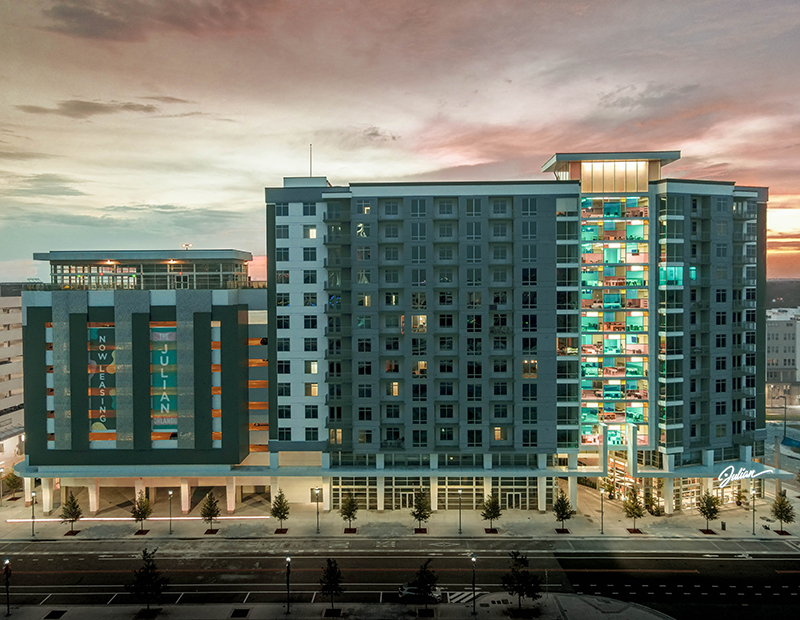 Rendering of The Julian Apartments. Image courtesy of The Allen Morris Co. and Ustler Development Inc.

The Allen Morris Co. and Ustler Development Inc. have completed The Julian Apartments at Creative Village in Orlando, Fla., a $108 million, 14-story, 409-unit, mixed-use community with 6,000 square feet of commercial space. The Julian Apartments is the first market-rate apartment building near the University of Central Florida and Valencia College Downtown campuses and will serve as the cornerstone of Creative Village, a “live-work-learn-play” mixed-use innovation district emerging on 68 acres of vacant city-owned land.

The urban redevelopment project builds on the success of Orlando’s digital media industry and is transforming the former Amway Arena into a mixed-use, transit-oriented neighborhood that is also home to the new UCF Downtown and Valencia College Downtown campuses. Known as Creative Village, it is a public-private partnership between the City of Orlando and the master developer, Creative Village Development LLC, which is a joint venture between a local team led by Ustler Development and Bank of America Community Development Corp.

The neighborhood is seeing more than $650 million in economic development including a new office building for EA Sports that will open in 2021 for 700 employees. In May, Mill Creek Residential broke ground on Modera Creative Village, an eight-story, 292-unit community at 505 Chatham Ave. that is scheduled for its first residents by early 2022.

The Julian Apartments is located at 462 North Terry Ave. and has studio, one-, two- and three-bedroom residences which range in size from 412 square feet to 1,307 square feet. Studios start at $1,275 a month; one-bedroom units at $1,785; two-bedroom units at $2,575 and three-bedroom apartments at $2,950 per month. The building, which also has an integrated parking garage on site, has 1,000 square feet of collaborative space on each floor. It has an expansive front porch overlooking the 2.5-acre Central Park, a rooftop pool with views of the downtown skyline, an indoor/outdoor fitness facility and interior courtyard.

Allen Morris, chairman & CEO of The Allen Morris Co., noted in prepared remarks that downtown Orlando is rapidly evolving and Creative Village is a new neighborhood at the center of that transformation. He said they are targeting a diverse mix of students, employees and residents for the building.

Craig Ustler, president of Ustler Development, said in a prepared statement the property had a successful pre-leasing campaign. As part of the master development team, Ustler said the completion of The Julian Apartments is an exciting step for Creative Village and validates the team’s commitment to delivering high-quality vertical development.

The Allen Morris Co. and Ustler Development secured $66 million in financing for the project in December 2018 from SunTrust Bank and Santander Bank via a syndicate led by SunTrust Robinson Humphrey. At that time, the development was still known as the Creative Village Parcel M Apartments.

Equity was provided by affiliates of The Allen Morris Co. and Ustler Development and Walker & Dunlop arranged an equity partner. The building was designed with the needs of the nearby college students in mind with the addition of the collaborative spaces on each residential floor plus co-working and conference rooms.